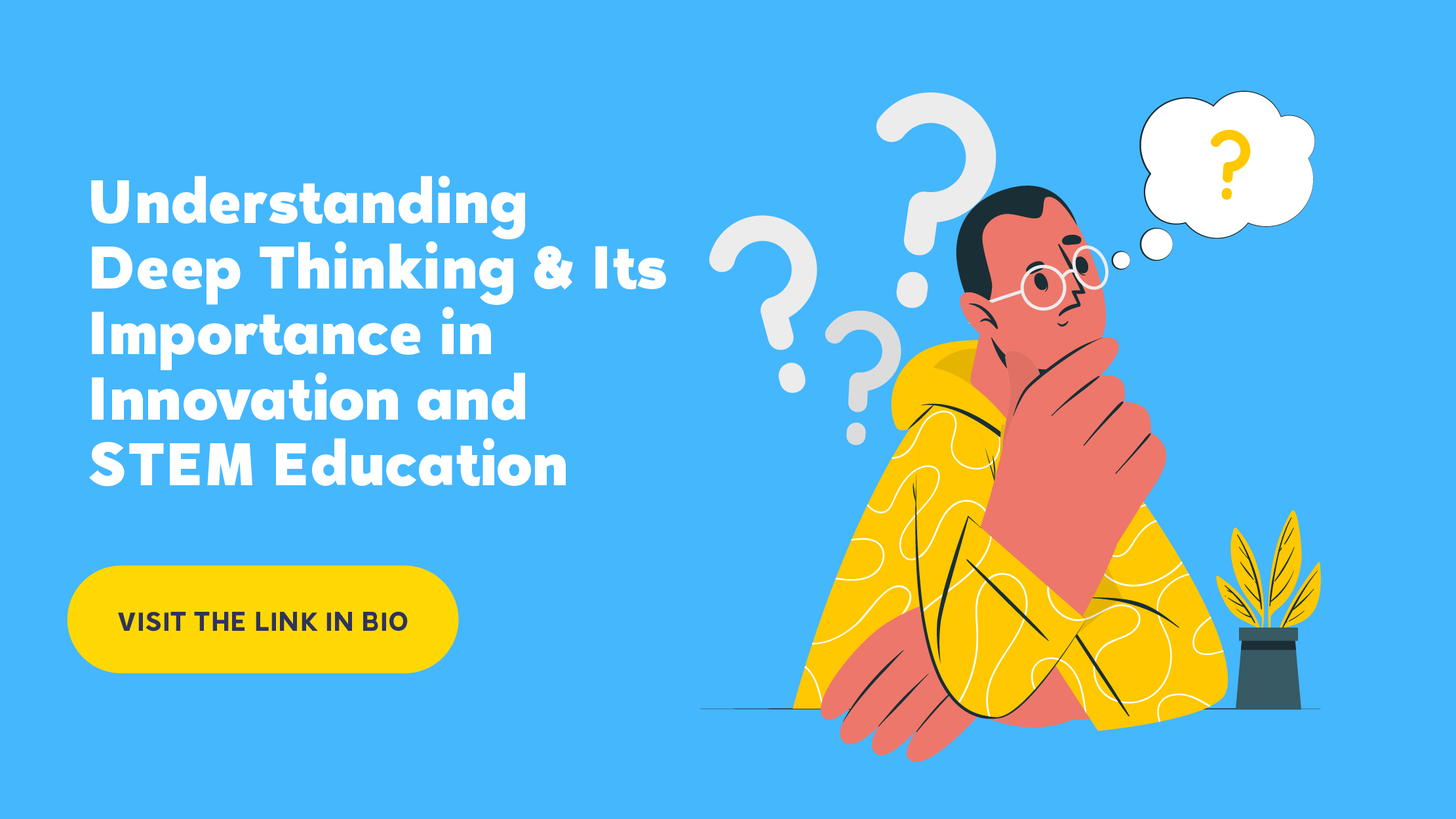 Understanding Deep Thinking & Its Importance in Innovation and STEM Education

The process at the core of creativity and learning is deep learning or deep thought. It goes by many names, including paradigm shift, reframing, and breakthrough thinking.

When one thinks deeply, one begins to view things in ways that are vastly different from how they previously did. If your kid can think deeply, then they will excel in STEM education, coding for kids and robotics for kids.

The Human Mind vs Machine Mind

This difference is more qualitative than quantitative. If it were quantitative, it would include computing power, analytics and big data, and we would have robots who could feel.

However, the difference is qualitative, which puts human intelligence at a different level. Humans are capable of deep thinking, unlike many advanced computing machines. And that’s the difference between the intelligence of robot cars and the person who created them.

There is a divide between human and machine minds that cannot be crossed. Thinking about the distinction between reality and its simulations can help you understand this divide.

No matter how brilliantly designed, a simulation will always be fundamentally different from the thing it is simulating. In contrast to simulations, which are secondary phenomena, human intelligence and creativity are primary phenomena that are immediate and real. Simulations are created by applying deep thinking to a genuine issue before and outside the model. The model generates further tasks, including computing and data analysis.

For instance, introducing “number” is the fundamental method for examining order in the physical universe. A system that defines a number—such as counting numbers or the real numbers, for instance—must be developed.

Number systems can be seen as models (or simulations) of numbers. Humans created the system, and the machine functions inside it. Once developed, such a conceptual framework for numbers serves as the foundation for a wide range of computations. It also has applications in analytical reasoning.

There are many other human activities carried out within the system. Counting numbers allows for the addition, multiplication, and division of numbers and many other human tasks.
As a result, the machine is enhancing one cognitive process in humans. There are other ways to employ the intellect, though.

What is Deep Thinking?

Deep thinking is a means to discuss the discrepancy between machine and human intelligence in specific terms. Deep thought is not analytical. It is involved not only in the development of the conceptual framework but also in the revision of it by the student.

A paradigm of deep thinking is the conceptual reframing that occurs when a child moves from the world of counting numbers to the world of fractions. It may seem natural and human for an adult, but it is a tremendous intellectual achievement. These conceptual systems tell you what a number is but in ways that are substantially incompatible with one another.

It’s challenging to understand deep thinking, not because it’s complicated but rather because it’s so fundamental. Deep thought is a natural function of the mind, not a mental process that must be forced.
The mind is active, dynamic, and creative in its “default condition.” It is not necessary to “switch it on.” It arrives on the scene already turned on

Every child can think in this way; it is a universal trait. Every step in a child’s conceptual growth necessitates an act of creativity. Since such thinking is fundamentally creative, it follows that kids are creative by nature. They can actively engage in problem-solving in a conducive learning environment.

Naturalness: The hypothesis that deep thinking is the mind’s default mode is supported by the observation that deep thinking occurs during young children’s conceptual development. Deep thinking typically happens during learning, intellectual growth, and creative expression. Unless suppressed, inhibited, or obstructed, it does not need to be taught or learned.

Difficulty: Something that is harmful always inspires deep thought. Deep thinking is, therefore, never easy. This issue could appear as a contradiction, inconsistency, or even ambiguity.

Discontinuity: There is a discontinuity to deep thinking; you either understand it or don’t. It entails an epiphany and a change of perspective.

Uncertainty and Incompleteness: Deep thought always entails giving up the familiar and the certain since it is based on the unknowable and the uncertain. Uncertainty is a fact of life; nevertheless, one can only find certainty within a pre-existing conceptual framework. As a result, switching from one conceptual framework to another unavoidably requires entering the region of uncertainty.

Reframing Ambiguity and Reification: Reframing, or taking a fresh look at a situation, is a crucial component of deep thinking. Every time a scenario is framed differently, it is implied that the issue is ambiguous and that there are other ways to see it.

Additionally, the two viewpoints are originally incompatible with one another. Reification is a reframing that introduces an ambiguity between processes and objects, where activities at one level are transformed into things in a higher-level system. It has also been referred to as “block learning,” “clumping,” or “encapsulation.

Innovation is the engine that powers the technological world, but ground-breaking innovation does not result from altering tried-and-true concepts. It results from in-depth thought, which entails developing an entirely new framework.

The ability of society to conceive the difference between machine and human intelligence is a prerequisite for our culture’s ability to maintain innovation and for people to successfully adapt to a world in which change is not only ongoing but also accelerating.

However, a lot is driving society wrong by believing that the distinction between genuine innovation and machine intelligence has already been eliminated or will soon. An algorithm cannot produce creativity. In actuality, algorithms are created by imagination, not the other way around.

We must carefully distinguish between those human abilities that machine intelligence simulates and those other aspects of intelligence and learning—that cannot be captured by a simulation, i.e. deep thinking. It’s important if we are to fully understand what appears to be a kind of chicken-and-egg problem.

It’s important to distinguish between creativity and computation.

The use of computational cognition continues until it reaches a limit or a barrier. The abnormalities it identifies give it significance for in-depth, imaginative thought. Of course, these abnormalities must be actively embraced for further creative advancement.

It is never simple to be creative because, like all serious thought, it requires overcoming a primary barrier. Something about the circumstance is unsettling, goes against accepted thinking, could be grating, and creates tension. Although it is unpleasant, the creative person cannot leave the problem alone or act ” regular ” by ceasing to think about it.

The only way to see the light is to fully immerse oneself in the situation with its complex components, endure the issue for extended periods, and eventually overcome the challenge. The problem must be faced to be creative. It is a crucial component of creativity.

Finally, it can say that deep thinking is the essence of the creative process. It takes creativity to adopt a significantly new perspective on a given circumstance or event. The phenomenon itself hasn’t changed; instead, the perspective from which one approaches the phenomenon has. If kids can deal with that cognitive dissonance, they can perform well in STEM fields, and science technology engineering and mathematics subjects.