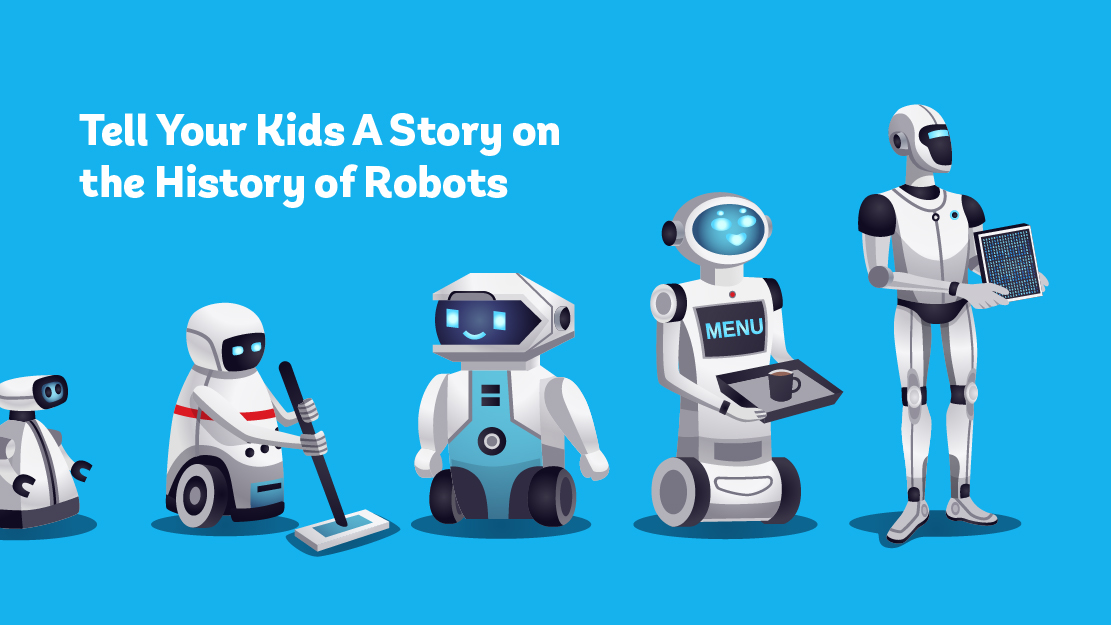 Tell Your Kids A Story About the History of Robots

When your kids take to learning robotics and engineering, it would be good to tell them about the history of robots as well. It makes for an interesting story and can motivate your child further to delve deeper into the subject.

A robot is any machine that can execute a series of tasks by itself or one that has the appearance of a human and can perform some of the tasks humans can do.

The term is derived from the Slavonic term Rabota which means providing service through forced labor. Czech playwright Karel Capek first coined the term robot in his 1920 play Rossum’s Universal Robots (RUR). In this play, the company RUR mass-produces workers using the latest technology to work in factories. However, these workers lack a soul and are devoid of feelings or emotions.

However, the term robotics was coined by American science fiction writer Isaac Asimov in his short story Liar.
In one of his other short stories, Asimov also proposed three laws of robotics:

1. A robot should not cause injury to any human or allow any harm to come to humans through inaction

2. A robot is supposed to obey the commands given by human beings except in cases where it contradicts the first law

3. A robot must safeguard its existence as long as it doesn’t violate the first and second laws.

There’s mention of artificial humanoid objects in ancient Greek, Buddhist and Indian legends. For instance, Buddhist scholar Daoxuan mentions humanoid automatons made of metals which could recite sacred texts. These creatures are believed to have cried upon hearing about the death of Gautam Buddha.

Similarly, an Indian legend talks about an army of humanoid automata tasked with protecting Buddha relics hidden in a Stupa. These humanoid warriors were also used for farming and weeding criminals from society. According to the legend, when emperor Asoka is engaged in a bitter battle with the automata over the Stupa, he manages to find the engineer who created the droids. Through him, he manages to subdue the robots and becomes their new commander.

The history of robots goes back to medieval times when human-like figurines were used to strike the hour bells.
13th-century Arab scholar and inventor Al Jazari, who is often considered the father of robotics and Joseph Engelberger is credited with inventing the first programmable humanoid. His inventions included a humanoid waitress that could serve drinks to patrons. The drink was stored in a tank from where it would drip into a bucket below and later into a cup. Later a humanoid would appear from an automatic door to serve the drink.

Al-Jazari is also credited with creating the mechanism used in modern flush toilets. His invention was a handwashing automaton that would stand beside a basin filled with water. Upon pulling a lever by the user, the bay is emptied, and the automaton refills it.

15th-century painter and artist Leonardo Da Vinci was an expert in creating detailed blueprints about how machines work through his illustration. He provided systematic explanations about how machines work and details about combining different elements of devices with exceptional clarity through his drawings and sketches. He believed that if one could understand how each part worked, one could combine them in different ways to improve the efficiency of existing machines or create new inventions. Many of his illustrations serve as inspiration for modern innovations even today.

In the 18th century, automaton toys that could move their parts independently became very popular. It looked human, and its human parts stuck together with the help of nuts and bold. These mechanical devices were in demand among the rich, who preferred to collect them for entertainment.

French toymaker Jacques de Vaucanson built numerous mechanical toys, famous among which was an automatic duck with multiple moving parts that could drink and eat on its own. It was a gift from the renowned toymaker to Louis XV, the then kind of France. His other inventions include a drummer and fife player, which were close to humanoid figures in design.

The idea of robots also began to find a place in literature and fiction by the turn of the 19th century, even though that term was yet to be coined. A famous story from that time is Frankenstein, written by Mary Shelly, which tells the story of a humanoid, a machine who looks like a man but functions like a machine.

Unimate was installed in 1961 at the General Motors Plant in New Jersey. Later on, it was deployed by Ford and Chrysler in their manufacturing facilities. As they moved down the assembly line, these arms could weld and spray paint cars. Very soon, Unimation was churning out huge profits.

After selling Unimation to Westinghouse in the 1980s, Engelberger began focussing on the application of robotics in healthcare. He founded Transition Research Corporation in 1984 and developed Healthmate, a mobile robot hospital courier. Like Unimate, this product became widely popular and was used in over 100 hospitals within ten years. Finally, Engelberger sold it to Cardinal Health.

Engelberger finds his place in the London Sunday Times list of 1000 makers of the 20th century for his contributions.

Engelberger was not the original inventor of the robotics arm; it was Devol. However, what he accomplished was a rapid adoption of industrial robots in the manufacturing industry. Thus, he helped democratize robotics technology as it quickly spread to the European and Asian markets. One would associate robotics and artificial intelligence with productivity and cut-throat efficiency. However, when he shifted his focus toward healthcare, owing to his aged parents, he transformed robotics into a service to help the ill.

He continued to remain active even in old age, and his invention drastically disrupted the work in different industries. No wonder he rightfully occupies his rightful place in the history of robotics.

In communities, industry, society, business, academia, and in the minds of creative people throughout history, art and science have coexisted alongside craft and engineering, analytical thinking and personal expression. The intuitive understanding that direct experience leads to peak learning has been accepted throughout history.

It’s a wonderful moment to be learning by doing right now. Never before have there been more compelling or potent resources available for the creation of knowledge and individual expression.

The future? We may have the best chance of reviving progressive education through the maker movement. Know that you are not alone as you go out on a personal quest to incorporate engineering, tinkering, and manufacturing into your classroom. You have the support of a rapidly expanding community of makers, and you stand on the shoulders of giants.