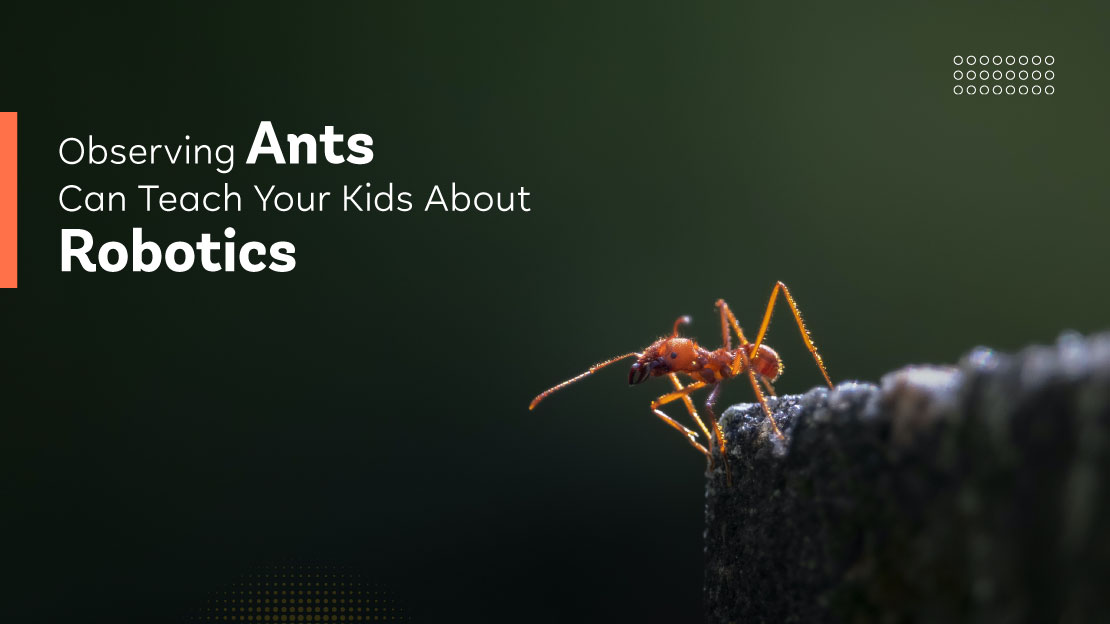 Observing Ants Can Teach Your Kids About Robotics For Kids

After the bacteria and viruses that remain invisible to the naked eye, ants come in second with a population numbering 100 billion. Ants have colonized all corners of the earth and are a common sight in your house garden or backyard.

Observing ants can be an ideal STEM education activity that can inspire kids to learn robotics for kids and coding for kids. Researchers are already studying ants on a broad scale to derive inspiration for designing robots that will serve different purposes.

At the heart of this research is a process called biomimicry. It is observing and emulating natural models and elements and then applying them in engineering and science to solve human problems.

Birds, especially eagles, have inspired aeroplanes. Similarly, termites have inspired architects to design buildings with self-regulating ventilation. Ants are intelligent beings and have survived for millennia.

Try observing them with your kid. It is an easy-to-do outdoor STEM learning activity without the need for robot kits and will give good insights when persisted with. It’s a well-known fact that ants live in tunnels and mounds commonly called anthills. Their movement inside these tunnels is now a subject of scientists designing robots that will undertake digging and rescue missions below the ground during mining activities or disasters.

The ants move smoothly in large numbers within tunnels. They hurry and tumble, yet the nest’s structure remains intact. What intrigued the scientists was the question of why the tunnel never collapsed despite this relentless activity. For a robot working underground, one of the important things it should be able to do is to avoid falls while dealing with treacherous landscapes.

How are ants able to tackle this problem? Researchers have found that ants build tunnels the width of the ant’s body size. The small size of the tunnel reduces the possibility of a misstep.

Similarly, in case of a slip, ants grab the wall of the tunnels using their antennae. The smaller size of the tunnel again ensures they can catch the surface in a quick time. The antennae are also a sensor device that can detect slight movement in the soil the ants are treading. They recover from a fall quickly and cause no disturbance to the overall structure. Swarm behaviour is another commonly observed phenomenon in animals. It is referred to as the collective behaviour displayed by a group flocking together, usually insects and birds, moving in a particular direction.

There is a unique robotics field called swarm robotics, where a group of robots works together to solve a problem collectively. For robots to work together, there will be several issues they would face, such as navigation without colliding with each other and spatial awareness.

These are very high-level tasks. Robots, as of now, are not good at working as a team. Their interaction may not go as planned. Research in this field is still developing, and real-world applications are currently rare.

Ants are social animals living in large colonies and display swarm behaviour. A study on how ants navigate can help understand how robots can move efficiently in uneven and complex physical settings, like moving in groups. You can observe ants moving around your home for this.

Ants rely on the straight line distance method to navigate, which is nothing but the distance between two points if you were flying. Ants also rely on visual prompts from their surroundings, such as the sun or the skyline, to find their way back home.

This reliance on visual prompters is an inspiration for developing autonomous navigation ability in robots. Navigating with visual cues doesn’t require much detailing about the physical landmarks which humans use to navigate. This simple navigation technique used by ants is now being applied in robotics to enable robots to navigate independently.

Another aspect of working together as a group is deciding how labour will be divided among the workers. Research on a group of ants to study their work patterns revealed a minuscule percentage of ants does a significant portion of work. An American study on the tunnel digging activity among ants found that 70% of the work was done by merely 30% of the ants. The rest of them just meandered around.

The result of this division of labour was that there wasn’t too much crowding at the work site, and the ants could carry out the work efficiently without bumping into each other.

This observation is a starting point for deciding how many robots to engage in an excavation activity to efficiently carry out the task quickly and without robots colliding with each other. As pointed out earlier in the article, many of the research ideas are in a nascent stage. Biomimicking inspires many innovations in the robotics field.

The example we mentioned above regarding ants has particular applications in defence and rescue missions. A drone’s ability to navigate autonomously without human intervention can save many soldiers’ lives on a battlefield. If drones can work in a coordinated manner in teams, then army battalions can become redundant.

Similarly, efficient digging and navigation during disasters like earthquakes will speed up rescue work and prevent the loss of lives. Who knew a simple activity like observing ants could be so helpful for STEM fields and robotics for kids?