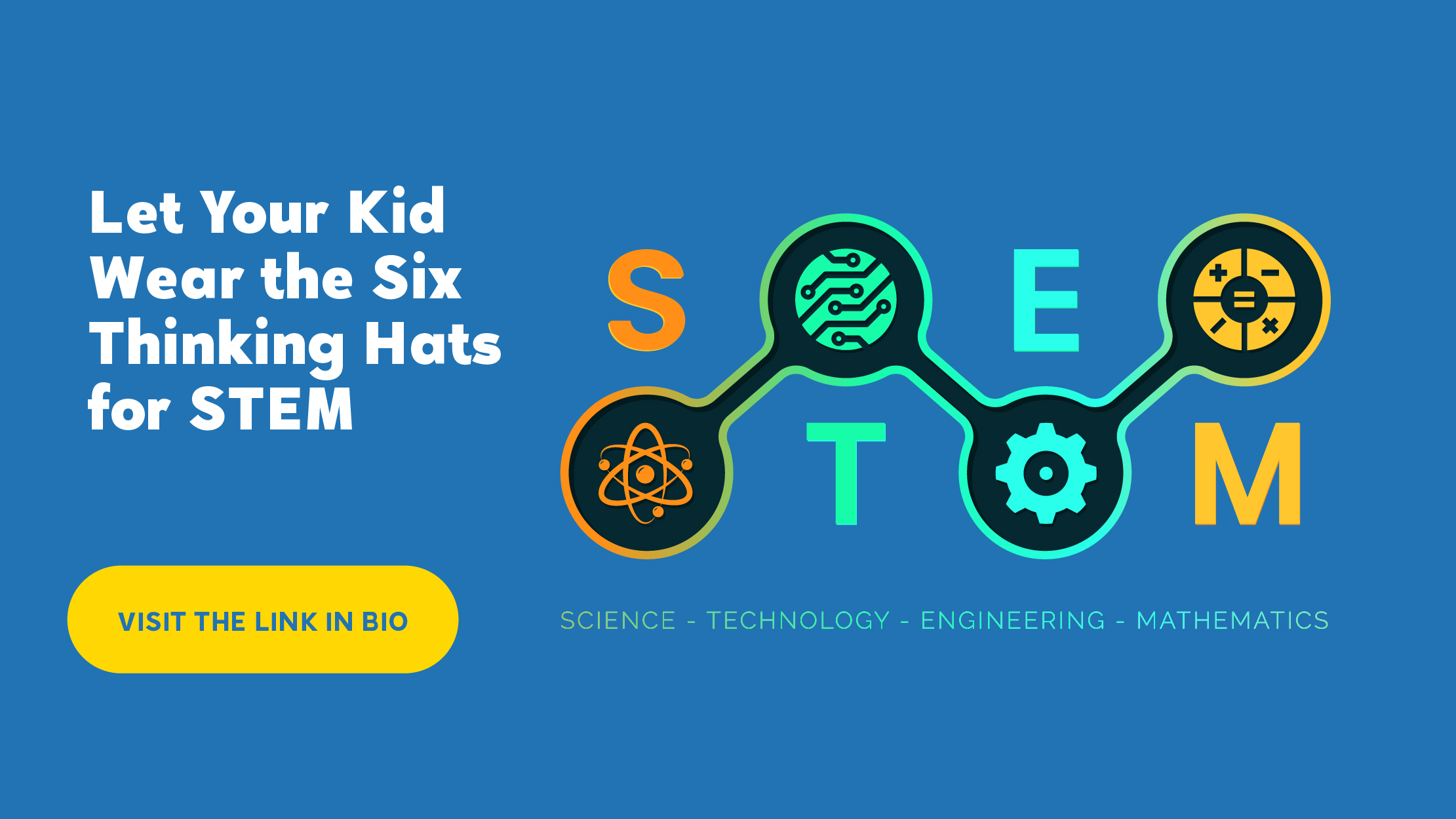 Let Your Kid Wear the Six Thinking Hats for STEM

STEM education can present your kids with different problems requiring different thinking skills to arrive at the solution. If kids can develop these thinking skills, they stand a very high chance of excelling in STEM and related areas such as coding for kids and robotics for kids.

In his book, Six Thinking Hats, well-known psychologist, author, and inventor Edward de Bono lays out several distinct ways the human mind can think. Knowing these methods allows the brain to think in a structured way about a situation, enabling one to build tactics for thinking.

The Six hats represent six ways in which you can investigate a problem. These six methods correspond to how the brain can be confronted to bring out certain aspects of the topic under consideration.

This technique has been widely adopted by corporations worldwide to train their employees to be more creative.

If kids adopt this in their learning environment, it would be very beneficial to develop critical thinking and to problem-solve in the real world, which is fast moving towards robotics and automation.

Let’s look at what the six thinking hats represent:

The white hat is concerned with data and information.

When you request white hat thinking during a meeting, you ask the participants to ignore the ideas and counterarguments instead of concentrating solely on the information.

Everyone at the conference scans the room to determine what information is accessible, what is required, and how it might be acquired.

Putting on the white hat is concerned with the following:

It is improper to express your emotions in a serious meeting, but this is precisely what some people do by passing off their feelings as reason.

When wearing a red hat, people are given a licence to express their feelings and intuitions and are free to do so without remorse, justification, or apology.

1. My gut feeling is that this will not work out
2. My intuition tells me that prices will go up

Even though the reasons for the intuition cannot be articulated consciously, it may be a composite judgement based on years of expertise in the field and be highly important. It should be noted that intuition is not always accurate and may even be mistaken. Sometimes it helps to express emotions in public.

The black hat is the “caution” hat. It prevents us from making mistakes, doing silly things, and doing things which might be illegal. The black hat is for critical judgement. It points out why something cannot be done.

For example, it can point to why something will not work out:

1. Our production capacity cannot meet that order
2. A higher price will lead to a fall in sales

Nobody likes to act foolishly or make mistakes, which can be pretty damaging. Thus, the black hat has excellent value. It is the most popular and might be the most practical hat.

Some individuals believe that being cautious and pessimistic is sufficient and that everything will be alright if you avoid any mistakes. The black hat can, however, be used far too often. With early negativity, it is simple to end new thoughts.

While wine is acceptable, excessive alcohol consumption might make you alcoholic. The black hat is the same way. The hat is incredibly precious, but wearing it too much could be problematic.

The yellow hat symbolises optimism and a logically positive outlook on life.

It searches for advantages, but they must be grounded on logic.

It involves looking at possibilities and how something can be done.

For example, it can be about making statements such as:

1. This might work if we moved the production plant nearer to the customers
2. The high cost of energy would promote prudent use

Yellow hat thinking frequently needs conscious effort. Benefits are not always readily apparent, and we may need to look for them. Every innovative concept merits some yellow hat consideration.

The green hat represents creativity and suggests further options and alternatives to a given idea or situation. It proposes scenarios and future possibilities that can be investigated further to build on the existing idea.

For instance, it can involve asking questions such as:

1. Is there any other way to do it?
2. Could this be explained in another way?

Thanks to the green hat, it is possible to request creative work directly. The green hat creates the time and space necessary for original thought. The green hat demands creative effort even if no creative ideas come to mind.

Blue represents the sky and something overviewing us.

The blue hat represents process control. It considers the usage of thinking and determines the agenda of thinking. It denotes the next stage of thought, and the blue hat can request other hats.

Donning the blue hat means asking for summaries, conclusions, and decisions. The blue hat may offer insight into the methodology being employed.

1. Could we have a summary report of your views?
2. Trying the green hat would be a good idea.

Some advantages of the Six Thinking Hats

The six hats allow us to get away from an argument to more fruitful discussions. The participants can don different hats to get different results. To list out dangers, they can wear black hat. To explore the benefits they can wear the yellow one. There is cooperative exploration instead of negative thinking.

Anyone who disagrees with an idea will not attempt to support it, and the opposite is true. The hat technique separates ego and performance. Because they are no longer constrained to one position, the mind is challenged to use the many hats and feels a sense of freedom.

Nothing can stop someone from being continuously negative in a normal conversation. With the hat system, there are many opportunities to be cautious when it’s appropriate (under the black hat), but negativity is inappropriate at other times. In this manner, the black hat’s inherent dominance is diminished.

When wearing yellow and green hats, it is possible to set aside time for deliberate creative work and a positive effort.

Setting aside time for creativity is not natural. The natural flow of thought and conversation leaves little time for creative endeavours. Unless we like the idea, it is not realistic to make time for positive thinking. However, if we do make a conscious effort, it may be rewarded.

While the hats are beneficial, what needs to be understood is that each hat is used occasionally. In other words, you only request one hat at a time. This is to ask for a particular way of thinking or to depart from a specific form. There is a typical conversation before the hat is used and another usual talk after the cap has been used. It’s simple to alter thoughts by wearing one hat.

There is no correct order because it depends on the topic, whether it has been thought of before, and the person conducting the thinking.

Adopting the hats approach creates holistic solutions that have been arrived at after carefully considering the relevant factors.