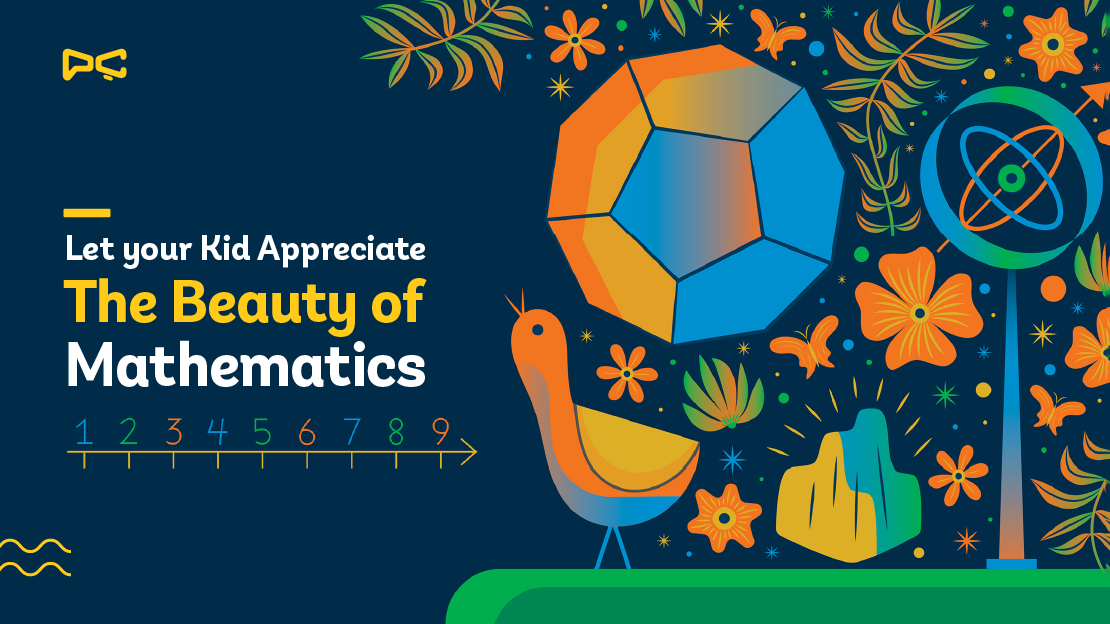 Let Your Kid Appreciate the Beauty of Mathematics

Your kid could be one among thousands of kids who hate maths. What may surprise you, however, is that the problem may lie not with the kid but with the way Mathematics has been taught in schools all along.

Imagine if children were to become naturally interested in Mathematics and enjoy it instead of fearing it. It could open up plenty of possibilities, especially when the world is moving toward automation and STEM education, robotics for kids and coding for kids are in great demand.

What is Mathematics? The answer to this question receives markedly different responses from students and mathematicians.

Students often think about mathematics as a subject of numbers and calculations by following specific rules or procedures. On the other hand, mathematicians consider maths a study of patterns and describe it as a creative and aesthetic subject. This difference doesn’t crop up in descriptions of different subjects, such as English literature.

This difference has a lot to do with how mathematics is taught in schools. Children consider it as a performance subject, where they are required to find the correct answers to the question in a given time. It is seen as a test subject to get maximum questions right. This constant testing leads students to think that is what mathematics is

Mathematics need not be that. It could be visual, full of uncertainty and made of connections and creativity. It is about exploring and making new interpretations and not about definitive answers. This makes school mathematics very different from real mathematics. Understanding maths in this way can lead kids to appreciate mathematics’s beauty better.

Mathematics is About Patterns

Mathematics is about seeing patterns, connections and relationships. A mathematical study can help us understand patterns and create new knowledge.
Mathematical patterns are used in navigation, space missions, and cellphone networks. Thus, these patterns touch our everyday lives and are an integral part.

Going beyond seeing mathematics as finding the correct answers to questions would require kids to look into the mathematics of nature. Patterns could be observed in wildlife, animal behaviour, weather etc.
Snowflakes, for example, are formed in hexagonal shapes. And it happens because when water freezes, water molecules form a hexagonal pattern.

When a spider starts building a web, it begins by first building a star shape between two supports. After creating the star shape, the spider moves on to building a spiral. The catch is that the loop needs to be completed as quickly as possible to strengthen the star shape.
To save time, therefore, the spider follows a logarithmic pattern. In a logarithmic pattern, the distance between each subsequent turn around the star’s centre increases by the same factor.

Following this pattern allows the web to expand more quickly as it gets larger. The logarithmic design leaves significant gaps between successive layers of the spiral. To counter this, the spider starts spinning a second spiral, following an arithmetic pattern. In an arithmetic pattern, the distance between successive turns remains the same. Thus, the circle is denser with small gaps, enough to allow the spider to catch its prey in the web.

Dolphins make clicking sounds, and then the sound echoes after hitting an object. The dolphins then use the length of time it took for the sound to reach back and the sound’s quality to determine the distance at which other dolphins are.

Mathematics exists everywhere, in nature, art, and the world. As parents, your work would be to make kids realise this. It will help them see the breadth of the field of mathematics; Mathematicians aver that maths is not about finding answers but about asking the right questions.

Research studies have shown that when students get a chance to pose mathematics problems, considering a situation and asking a question from it makes the subject more interesting, and kids can engage more deeply with the topic.

This approach to learning real mathematics is quite different from how it is taught in classrooms. Well-known mathematician Stephen Wolfram proposes working on mathematics using a four-step method:

1.Pose questions
2.Developing a mathematical model
3.Performing computation
4.Going back to the real world to see if the original question was answered

It starts with asking the right question, then setting up a mathematical model to solve the question, performing a calculation and finally seeing if the solution works in the real world.
In schools, too much emphasis is placed on the third step of the calculation, which a calculator or a computer can perform.

The ability to calculate or compute has dropped significantly in importance. However, top mathematicians possess the ability to ask good questions, develop models and analyse results. These are also the skills that will be in demand at work.

Mathematics is collaborative work. What is needed is the ability to reason mathematically to prove or disprove theories. Debating about ideas, forming logical conclusions and arguing with other mathematicians is what mathematicians do. In schools, students are made to solve problems alone, and there is no classroom discussion about the topics. Such discussions encourage students to think critically, engage them, and develop new mathematical pathways.

As parents, you can focus on making your kid’s mathematical learning a collaborative work with more focus on asking the right questions and the ability to reason through the answers. Don’t let your kids remain trapped in a limited understanding of Mathematics, Let them see the beauty of it.