Skip to content
Home Blog Is It Safe to Give a Flying Robot Drone to Your Kid ? 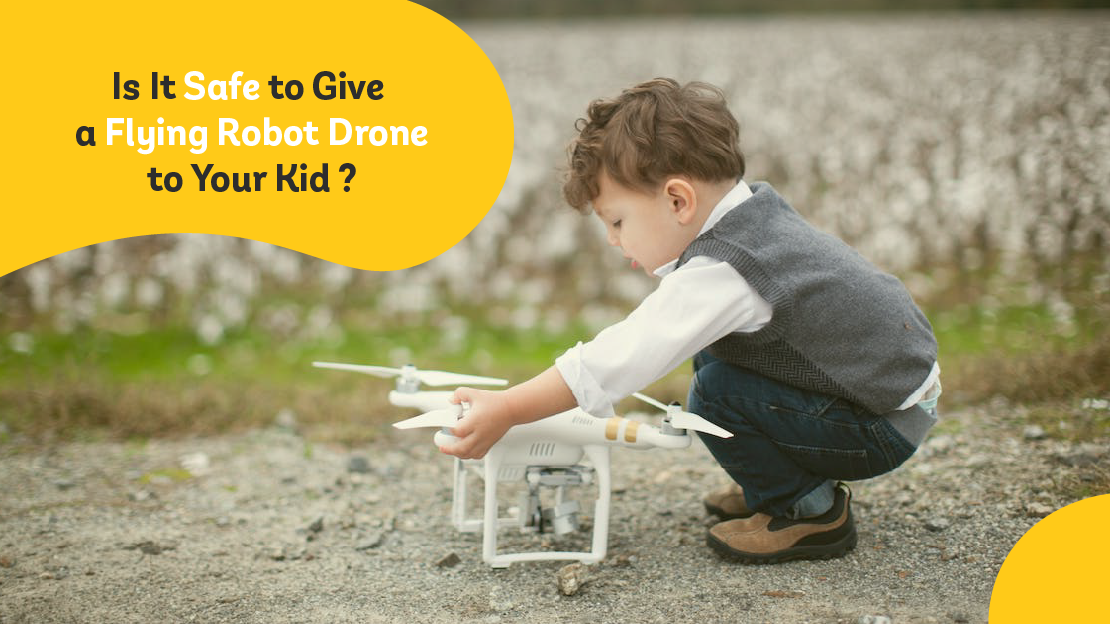 Is It Safe to Give a Flying Robot Drone to Your Kid ?

Unmanned Aircraft Systems (UAS), or drones and flying robots, as they are called, are growing in popularity as they become more affordable and technologically advanced and find wide applications in day-to-day life. Learning about flying robots and autonomous vehicles is also becoming indispensable in practical STEM education for kids. While kids of yesteryears, might have asked for things such as candies,and ice-creams from parents, kids of today’s generation are demanding advanced playthings such as drones. This is in addition to ice-cream offcourse. Which kid doesnt like it?

Flying robots are crewless vehicles which can be flown and operated through remote control from the ground.

Flying robots are now available in various sizes, models and designs, making them appealing to kids and adults alike. Some are made of plastic, while some are made of metals. The global drone market is expected to reach $50 bn by the end of this decade, and governments worldwide are also recognizing the importance of drones in areas such as food delivery, defence, agriculture, film production etc.

Toy drones are a rage among kids, and flying robots find many takers in drone enthusiasts and hobbyists. Most of them are reasonably priced and lightweight, which makes them attractive to kids who use them for recreational and learning purposes. They are easy to use, and also act as a great learning tool for kids.

However, as more and more drones take to the skies, it also raises the possibility of untoward incidents such as accidents and breaking of the law.

As parents, you may have some concerns about your kid’s safety while handling flying robots. The drones may collide with buildings, or your kid may be flying the device in a restricted area. So, is it safe to give this to your kid?

What Rules Parents Should Know

Let’s look at some rules you should know before your kid begins flying robots.

Drones have been classified into five categories:

Nano drones are very light and quite popular as you do not require any permit or license from authorities except in restricted areas such as airports. Even for micro drones, you don’t need a permit to operate them, provided the drone is used for non-commercial purposes only. However, ensure you fly the unmanned aircraft at a height below 50ft.

However, appropriate training and license are required to fly any other drones and to fly the micro drone for commercial purposes. You would need to obtain a Remote Pilot certificate from an institute approved by the Directorate General of Civil Aviation to fly them.

Parents must also consider other factors mentioned below beside the drone usage guidelines.

Most toy drones are suitable to be used by kids above eight years. As parents, you can determine the appropriateness of a flying robot for your kid. However, nano drones for the recreational purpose would be ideal for kids. The recreational purpose would mean when unmanned aerial vehicles are flown as a hobby for non-commercial use. To be used for a commercial purpose, you would need permission from the authorities.

Your kid’s safety is also a paramount concern when you give them flying robots. Flying a drone requires the kids to have good hand-eye coordination, reflexes, and thinking skills. Your kid’s ability to handle the drone must be assessed to prevent untoward incidents.

Very young kids can injure themselves through the drone parts, so it is essential to ensure kids are old enough to understand handling the device. Moreover, drones should be used outdoors by kids under parental supervision.

Flying robots fitted with cameras can be used for information gathering, presenting a security and privacy violation issue.

Before handing over a drone to your kid, they must be made aware and warned against the possible misuse of drones. Drones are prohibited in sensitive areas such as airports, defence establishments, and near international borders. Kids must be sensitized about all these aspects to stay on the right side of the law.

Obtaining a licence is mandatory as per law, except for nano drones and micro drones. As mentioned above, flying a drone requires proper training to avoid collisions and accidents. So, make sure your kid is adequately trained.

Operating flying robots requires developing good muscle memory as it involves a lot of repeated actions. Ascending the wings robot and descending are basic manoeuvres. Flying a drone also requires other tricks, such as pitch and roll. Manoeuvres are essential, especially when the device is fitted with cameras to capture good images and footage. Delicate manoeuvres are proof of skill in operating drones, plus it also helps in capturing clear images.

Similarly, most toy drones are fitted with GPS technology, so the operator is not flying the drone but actually guiding its direction. The ability to delicately manoeuvre the drone without using GPS is good to learn as the drone may spin out of control due to a faulty GPS system, and it can damage the device or injure others. Therefore, practice flying drones in ATTI mode where GPS positioning is disabled, allowing the user more control.

Flying in an Open area

Practising flying drones must be done in open spaces such as a park or a playground. Flying the device in trickier areas may look attractive, but safety is essential. You can avoid trees, buildings and other obstacles and learn to fly the drone without any disturbance and damage to others.

Establish the boundaries within which you will fly the drone to prevent any unexpected incident. Similarly, morning is an excellent time to fly due to less crowd and proper visibility. Another thing to be considered is the wind speed which will determine the degree of control the operator has on the drone.

In all the fun the flying robot provides, it’s easy to forget drone safety and operational issues. By heeding the points illustrated above, you and your entire family can have an enjoyable time outdoors and usher your kids into the world of robotics for kids and STEM education.