Skip to content
Home Blog Are Kids More Creative When They Are Happy? 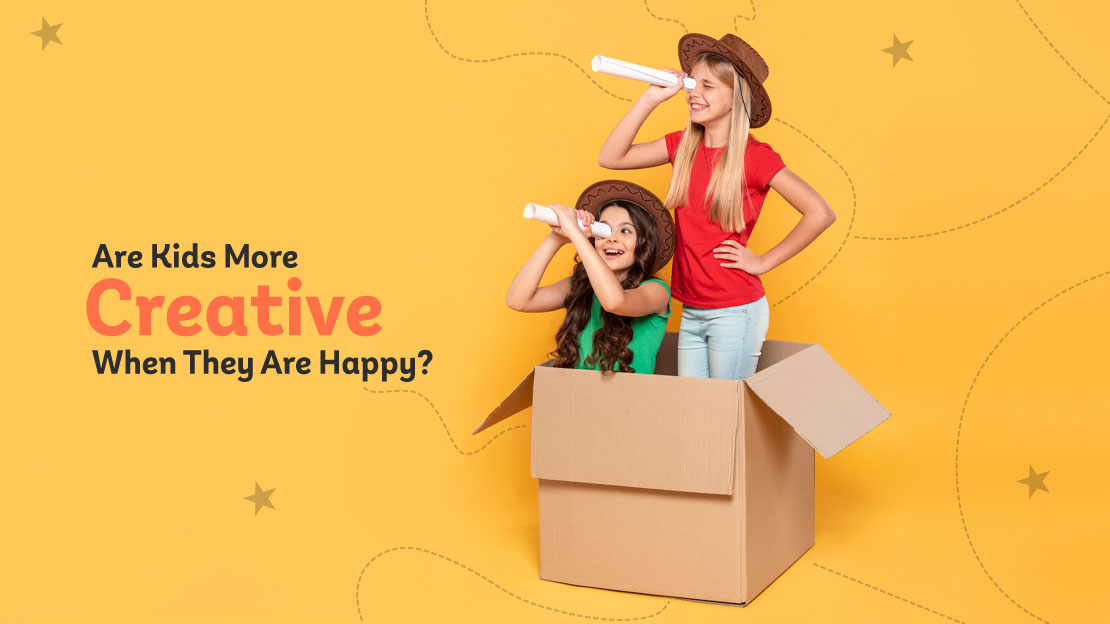 Are Kids More Creative When They Are Happy?

Humans have the power to think creatively and out of the box, the power that differentiates us from other living organisms. It’s not the preserve of any particular profession either.

The ‘‘Aha moment’’ can fall upon anyone anytime, whether that person is an artist, entrepreneur, or anyone else. The same goes for kids, who are also considered to be innately curious and creative. That realization is often preceded by persistent effort and thought process, which lingers on in mind even after someone has stopped working on the problem.

We have heard of several instances of whenever someone is about to set out on an experimenting mission. They go through a fixed set of rituals, deciding the food they will eat, the clothes they will wear, the place where they would sit to work. These preparations around all these would be part of arriving at the right mindset that will spur them on. Think about how mothers would prepare their little kids on the exam day.

This blog is to understand that If you plan some STEM activity such as coding for kids or robotics for kids, what should you do as a parent to get your child in the right mindset?

What’s considered essential is the fact that before getting your kids into some activity, it is essential to do everything to keep them in the right mood. Emotions play an important role in determining the outcome of the action.

We need to look at two main factors, which will include the following:

Results of research studies point in both directions. Suppose we discard negative and positive emotions for a moment. In that case, some other factors which determine the creative output of kids, primarily when they are engaged in student learning activities such as coding or robotics for kids, are the level of motivation and intensity the kids have. However, that motivation would also ultimately depend on what emotions the kids are going through.

Creativity might stem internally from direct observation or own ideas, often called proactive creativity, or it can arise from external situations such as having to solve a problem, known as reactive creativity.

As a parent, you wish your kids are happy and lively. Psychology also agrees with it as positive emotions are conducive to creativity and are associated with proactive creativity, leading to the generation of new ideas and open-minded thinking.

However, let’s not wholly disregard negative emotions. They cause the thinking to be more focused and linear, which can empower kids to find creative solutions to problems at hand. Such emotions are attached to reactive creativity.

Being positive is undoubtedly essential as it broadens the scope of attention and imagination and the wide range of possibilities one can come up with. However, negative emotions can help execute those imagined possibilities in real life, as such feelings are associated with perseverance and concentrated thinking.

So, where should your kids be on the emotional spectrum? As always, maintaining a balance is the key. It will bring out their creativity if kids can handle positive and negative emotions and actively engage with them. Kids are not always happy or sad, and emotions are always a mixed bag.

Another strand of research that talks about the ability to deal with emotions talk about something called motivational intensity. Some studies further show that feelings may hardly matter; on the other hand, it is all about the level of motivation.

Kids who are more creative will inherently display and experience intense emotions and actively engage with them. It could be joy, anger, or stress. These emotions usually have to cross a certain threshold to translate into action.

It then means that it doesn’t matter what mood your kid is in, happy, sad, or angry. Creativity will flow as long as they are experiencing those intense moods.

What’s the optimal motivational state, then? Researchers have found that creative people display strong connections in their brains between regions responsible for focus and logical thinking and areas responsible for imaginative thinking. Being creative would require both the skills, the ability to see the big picture, and the ability to narrow down the attention.

This supports the idea we illustrated above that kids actively engage with emotions. During the creative process, the brain will experience all kinds of sensations such as joy, euphoria, and logical thinking. The test of the kid’s creativity will lie in how well they can adapt to these emotions and mix them to bring out a creative output.

STEM learning especially coding for kids and robotics for kids, requires and also results in a creative attitude in kids. As parents, now you would have become aware that a positive atmosphere need not always be a pre-requisite for nurturing creativity in your kids. Even negative emotions would do the job.

Positive and negative moods have their respective implications in the creative process and both of them play a valuable role. On the one hand, brainstorming and the ability to see the larger picture act as a springboard for new ideas. While, on the other hand, perseverance and focus help to narrow down our attention to the specific problem. This complementary approach is pretty effective to find innovative solutions.

This article debunks the widely prevalent thought that being emotional clouds thinking. On the other hand, emotions can be a trigger to bring out the creative abilities in kids in learning environments. It shapes their perceptions about the world and develops their problem-solving abilities. The point to be noted here is to employ these emotions productively to tasks that can be completed effectively. By understanding one’s moods and emotions and accepting them as they are, kids can approach challenges and problems from a fresh viewpoint.

Previous Post
Let your kids make mistakes. It’s good for their brain!
Next Post
Why Kids Need Reflective Thinking and How Parents Can Help