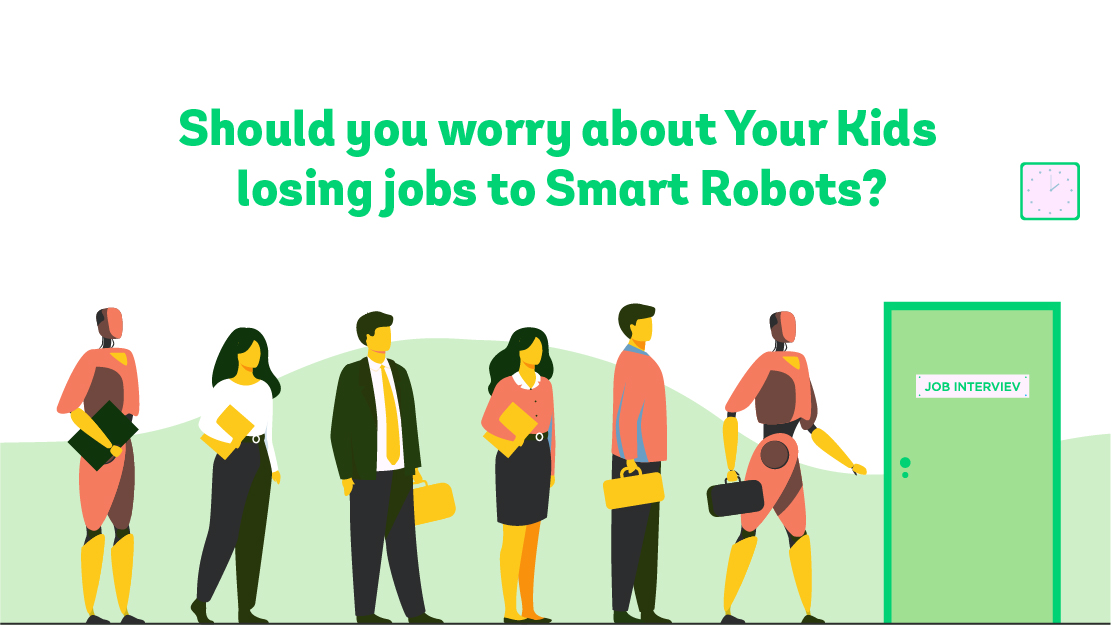 Should you worry about kids losing jobs to Smart Robots

As we witness growing automation and the increasing application of artificial intelligence in our daily lives, this idea of intelligent robots taking over the world is no longer limited to the realm of films or fiction.

Will robots replace humans in future jobs? A report by consulting firm Mckinsey predicts that over 800 million people will lose jobs automation by 2030. As parents, should you be worried about your kids losing jobs to smart robots in the future?

Will computers and smart robots render humans irrelevant in the workplace?

This time, however, the speed and scale of automation in the workplace are at a pace like never before.

Entrepreneurs like Elon Musk, known for building companies around futuristic technologies such as SpaceX, Tesla, and Neuralink, are vocal about improving productivity by introducing robotics and automation.

His venture SpaceX aims to send humans to make space tourism a reality and has plans to send humans to Mars. Neuralink aims to build a chip which can be implanted into the human brain and then used to translate thought into action. This technology will help especially those who have brain paralysis.

When personalities like Musk lend support to the idea, the threat to human jobs starts appearing real.

What will robots likely Takeover

Robotics and automation will play a critical role in addressing the skills gap and help in filling unfilled jobs and optimizing productivity. Jobs that involve physical danger to life, repetitive tasks, and are unpleasant stand the perfect chance to be done by smart robots.

To the question, will robots take away human jobs, the answer is yes. It’s the era of smart factories. Robots programmed with the latest algorithms will speed up production work and improve quality to meet the standard specifications.

The superior technology has made computers extremely powerful, and they are doing things previously thought difficult or impossible for them to do. For instance, for a long time, speech recognition had been perceived as a very complex task for a computer due to variability in the speaker’s voice, ambient noise and differences at the phonetic and grammatical levels. But we have AI assistants like Siri and Google Assistant that are commonly used today. We only need to give a few voice commands, and the task gets done immediately.

So, while robots can Takeover some dangerous backbreaking work such as lifting and sorting heavy materials in warehouses, such as those found in Amazon’s warehouses, people will be needed to operate these machines. Since machines are taking over such dangerous and monotonous work, it will also save people from harm and ill health.

Despite the arguments that things are different this time, it’s essential to understand that jobs always exist. Technological improvements often only serve to enhance the importance of the human element. For instance, a teacher can provide better lessons with Audio-visual and other specialised tools than just talking to the students.

Society evolves to adapt itself to change. A few decades ago, a lot of things we enjoy today didn’t exist, like blogging, online retailing or Video calling. It would not have been easy to imagine these things back then. Similarly, it would be difficult for us to imagine and tell exactly how things would be 100 years from now.

Similarly, experts in robotics, programming and other areas directly responsible for creating automation technologies will also be in great demand.

However, we can invest in building institutions that will ensure that today’s kids are well equipped to handle any change in the future. It could include providing better education, better healthcare and so on, which will keep them in good health and equip them with the right skills to come up with new and better ideas to ensure the progress of our society.